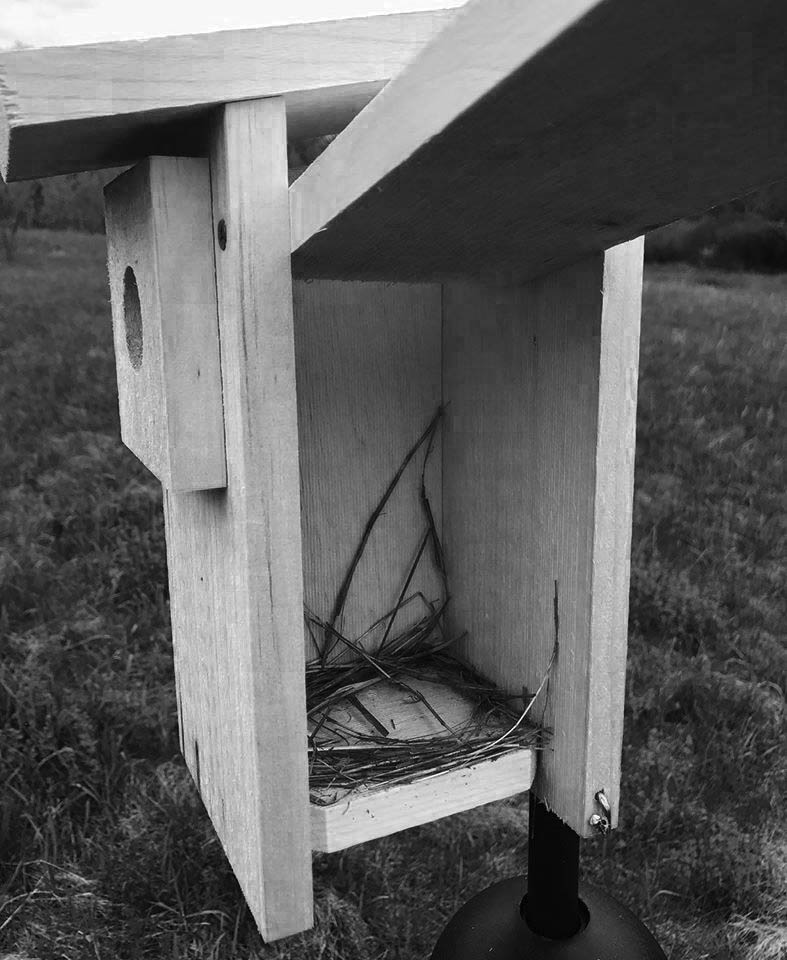 Warning: This post starts out nice and light and then descends into a virulent political diatribe. You were warned.

This is a reference to eight birdhouses we recently placed in the park where he and first met, doing trailwork and putting up kiosks together.

Today I was happy to report that 4 of the 8 houses have the beginnings of nests. Birds of unknown species are starting to bring strands of grass into the boxes. This is quite wonderful: it feels like we are in a real partnership with Mother Nature and her feathered beings.

We won’t know if these are “good” or “bad” (invasive) birds until the nests are farther along or they lay eggs we can identify.

I am told that we should destroy nests, eggs, and even chicks from “bad” species. We’ll see about that.

So after happily looking at the early-stage nesting activities together I told him I was taking the Jewish vet for a ride first, since he is often out cold if we wait till after ride number one with my regular guy.

So I asked the head nurse if I could take my Jewish buddy for a wheelchair ride, inside in the tunnels, as it was a bit rainy.

The nurse said yes, so I went and got my Jewish buddy going and we rolled out the main door, whereupon the same head nurse said You can’t take HIM out. I thought you were taking your normal guy.

I said I have taken this fellow for rides before this.

She said no, I was not a family member and not known to the fellow’s family as I am to my regular guy’s family.

I said I would not take him outside, just a ride in the tunnels, as we had done before.

So I took him back inside the door, back to the dayroom, where the nurses there were surprised to see us back so soon.

I explained how the head nurse said NO.

They said she can call his wife and ask, so I went and suggested that.

So my Jewish vet didn’t get his glimpse of freedom.

And for me, all my different feelings of anger and feelings of foreboding merged into a single black cloud.

The defense contractors that built these pieces of shit made billions which they won’t return. The executives that told the lies will keep their bonus dollars.

Big defense does exactly what Eisenhower warned us about: out of control projects that no one has the courage to talk against because they are about so called national security. And they create jobs back home.

With our tax dollars that should go to Veterans, infrastructure, college tuition, and so forth.

Big defense owns the politicians, so we build garbage war ships and planes that don’t work.

Big pharma owns the government, so we pay more than all other countries for drugs.

Big energy owns the government, so we can’t switch to renewable fuels.

Big insurance owns the government, so we can’t have national health like all other advanced countries.

Big guns owns the government, so we can’t have reasonable gun laws like other modern countries.

Big Wall Street owns the government, so they commit crimes of all sorts and pay tiny fines.

My black cloud is greatly enhanced by the ongoing presence of the racist rapist in Washington, his war on science, the press, on civility and on America.

My black cloud is enhanced by watching defense money invade my town, and disfigure the park where I have spent so many hours clearing trails, putting up signs, leading walks, and keeping up the website.

A giant military drone cage now looms over the park, a result of out of control defense spending. But terrorism! We have to have it we are told.

And my black cloud is enhanced because my regular guy and my Jewish vet buddies are not given the care they deserve because we “can’t afford it”.

I am angry and don’t know where to begin.