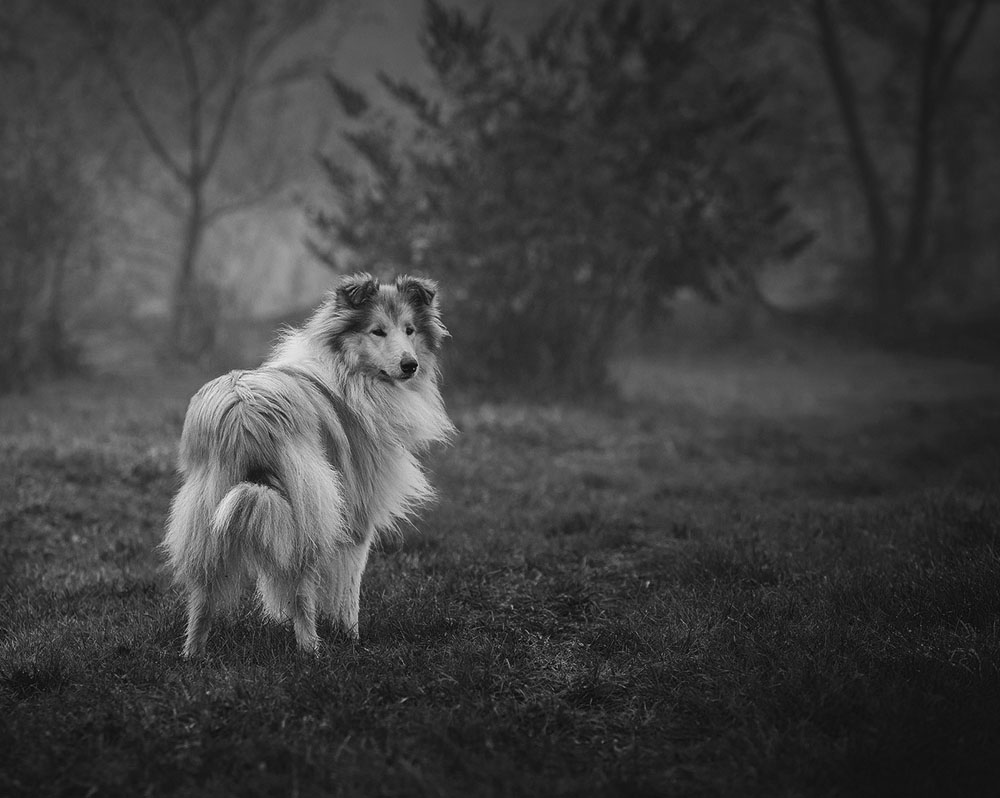 The End of the Dog

The details are still vivid but the dates are blurred in my memory.

We had a sweet, apologetic dog name Bonnie, a collie who was so timid that when herds of deer gathered to graze in our fields she would hide under the couch in fear.

But she would often walk me the quarter mile to the bus stop in the morning and she always took herself safely home after I got on the bus.

And she would often meet me at the bus stop in the afternoon and we would walk down the steep winding dirt road together. Sometimes the neighbor’s dog would join us but when we got to a certain line where our driveway met the road, Bonnie would step into the driveway, turn around, and bark at the other dog to stop there. The boundary was clear: the road belonged to anyone but Bonnie knew the driveway was Ours.

My first moment of regret with Bonnie came from a foolish attempt on my part to knock pears out of the pear tree on the back lawn. Somehow, I managed to climb the tree with a pretty good sized rock in one hand. I then took aim at a nearly ripe pear and threw the rock down, hard, to knock the pear loose.

Bonnie, my friend and fan, was standing under the tree, trying to cheer on whatever it was I was up to. The rock came flying down and hit poor Bonnie right on the top of the head. She yelped and ran and I jumped down from the tree to find her and apologize.

That rock was bigger than Bonnie’s head. It could have killed her and I felt awful. I still do. But she seemed to bounce back. I never told my family; it was just too foolish and hurtful a thing to admit.

But later on I did another foolish thing that was the end of sweet Bonnie the collie.

It must have been somewhere around 1967. I had started hanging out with friends that smoked weed and I joined in. For over a year I smoked with them and never felt a thing. I was impervious to it, but pretended like any foolish teen who wanted to fit in.

But one day I conspired with my friend Chuck to build a water pipe so that we could really smoke without burning our throats. We went the the empty third floor of our barn. We took a big glass chemistry flask and bent some glass tubing to make a sciencey-looking water pipe. Chuck fitted a corncob pipe on the end and we started in.

That time I did get high. In fact I got so high that I was hallucinating vividly. I was surrounded by giant swirling colored candy cane shapes – and then a big fuzzy bear was licking my face.

But it was not a bear, it was Bonnie, who could see something special was going on and wanted to join in. Sweet Bonnie.

As it happens, I never got that high again, even though I spent the first two years of college trying mightily. I never did and by junior had pretty much stopped smoking weed in the hopes of getting my mind and my memories back.

Back from college, back to Bonnie.

At some point I got the clever idea that the way to hide the water pipe from my parents was to not hide it at all. It was made from chem lab parts and our house always had science objects like that sitting around. So I put the flask (without Chuck’s corncob pipe) on our back porch, in plain sight.

One day I saw Bonnie on the porch with the flask and she was – eating the glass tubing that stuck out of the cork atop the flask. Something about the smell of the weed had overturned her normally sound thinking.

I knew this was very bad but had no idea what to do. In those days, weed was seriously illegal, and calling attention to the whole mess did not seem like an option.

So I hoped that Bonnie would get over this the way she got over getting hit in the head with that rock.

She disappeared the next day and we never saw her again.

I think she did a dog thing; she knew she was dying and crawled off into the woods to die alone.

I don’t like thinking about this. It is a terrible memory. But keeping it locked in won’t erase it.

And while I am not clear on the dates, I think that Bonnie’s disappearance was overshadowed by the beginning of an even greater tragedy: my father’s descent into cancer.

So it has been a secret of mine, but now you know, too.

Writing this brings back what a sweet, loving dog she was, which only makes it hurt more. I wish that back then I had appreciated this timid dog that would walk me to the bus stop and back.

Is fifty years later too late to cry, for the first time, about the ending of a dog?