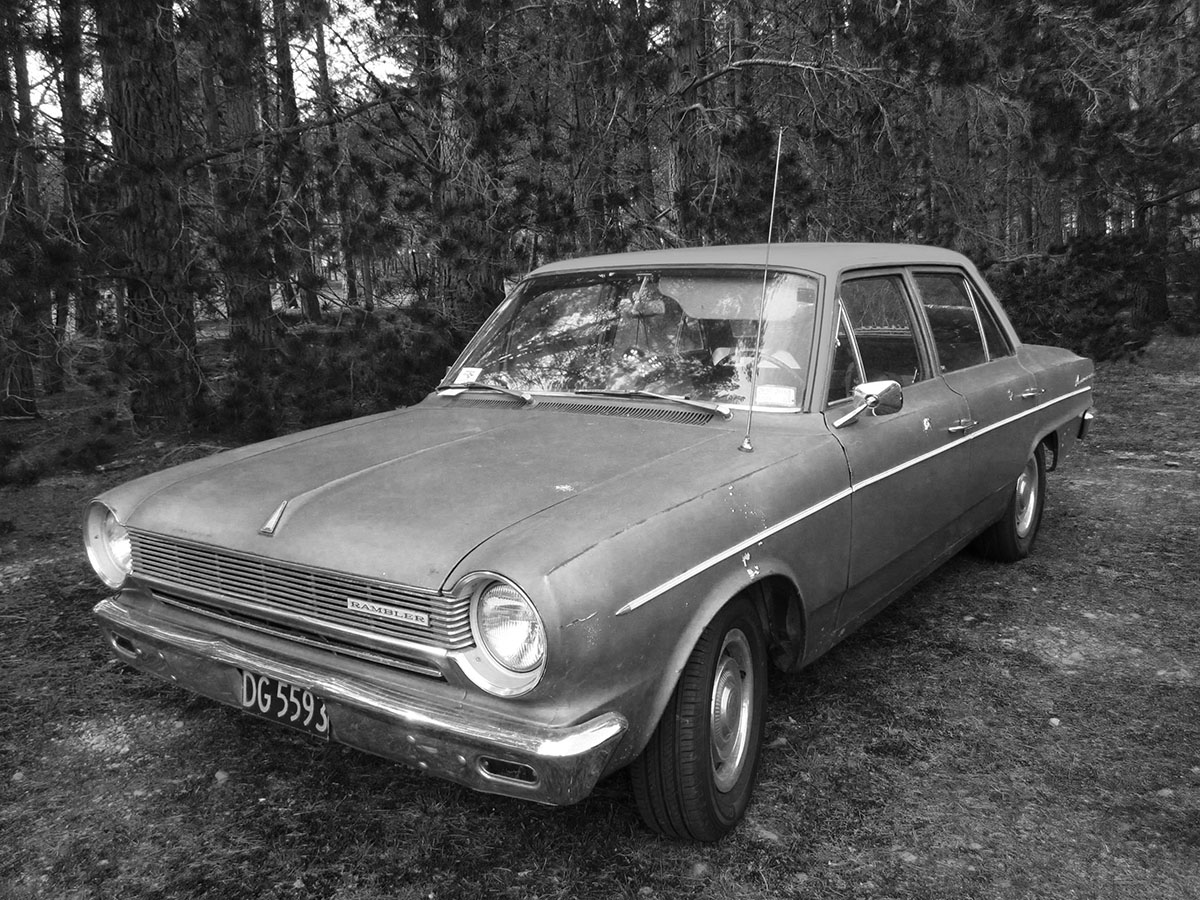 His Only New Car

My father only had one new car in his life, a 1964 Rambler American. Most of our cars were not just used, but barely operable wrecks. Once they bought one for five dollars, but it came without tires, so it probably cost almost a whole hundred dollars by the time they got it on the road.

But the time came that my father’s business was going well enough and my mother had started her teaching career that buying a new car finally seemed both feasible and acceptable.

There were a number of trips to the Rambler dealer and much serious discussion about such a major purchase, nearly $2,000.

A 1964 Rambler American is listed at the least expensive car on the market at the time, and I am pretty sure he got the base model. We ordered it and waited weeks for word that it had arrived.

It was flat grey, but the interior was bright red and very sexy.

It was so quiet that my father heard just one ticking sound and was delighted to find that it was the clock. It was the only car we ever had where the clock actually worked and, not being digital, it ticked. He loved that. He wanted to write an ad for Rambler about the fact that the noisiest thing in a new Rambler was the clock ticking.

My mother hatched the idea that my father and I should go on a break-in drive together. In those days it was thought that a 500 mile break-in drive was required.

I suspect that the trip was fomented by my mother because she could sense that my relationship with my father was getting tenuous and some forced bonding might help.

The Corning glass museum in western New York State was our chosen destination.

The trip didn’t help, didn’t hurt, but left me with some vivid memories.

We stopped for dinner at a Howard Johnson restaurant somewhere near Elmira, New York. Elmira happens to be a town where Mark Twain lived and wrote some of his best work, but our waitress just called it “Crazy Elmiry”.

We were sitting quietly at our table when an old man came up to us, walking very gingerly. He said, “Excuse me, but I wonder if you could do me a favor?”

He then proceeded to explain that he wanted to get married – right then – but needed a witness to go with him and his bride-to-be to the Justice of the Peace. Would my father be his witness?

I think we both immediately wondered how this could be the beginning of some sort of scam, but we couldn’t picture this gentle, apologetic, old fellow being the point man of a scam. And I seem to recall that his fiancee was standing a few paces off to the side, also looking extremely harmless.

So my father said yes, and as soon as we finished dinner and paid we got in the Rambler and followed them down the street to the house of the Justice of the Peace.

We all went inside and the JP got out his official papers and everyone signed. Then his wife went over to the TV where I Love Lucy was playing and she carefully turned the volume all the way down. During the very brief ceremony I could not help glancing over to see what Lucy was up to on that old black and white floor model TV.

The happy couple lined up in front of the JP and his wife, who was also the other witness, the JP read the proper words, the couple said “I do”, gave each other a gentle, quiet kiss and that was that.

We wished them luck and went back to our car and back to our motel, might have been that same Howard Johnson. We mused about what the story might be that caused this very old couple to get married that way, with no family, just two strangers. We wondered if it was a practical solution to a problem or purely romantic.

The Corning Museum was terrific, and probably still makes for a great visit. We had also visited the Howe Caverns, which was cool and creepy but also memorable.

But on the way home we saw a roadside attraction called The Woodland Museum. Seemed funky and interesting with outdoor animal exhibits so we stopped to visit. But there was something very sad and run down about the place. It had just rained and the puddles and dampness added to that mood.

I don’t know for sure about my father’s reaction, but for me a great feeling of sadness came over me as we drove away, and that feeling stayed with me all the way home.

I would guess that we spoke a bit about the Woodland Museum,  perhaps commenting that it wasn’t much of a place to visit.

But I think that the failings of that fading roadside attraction must have melded with our own senses of failures and losses, because I think we were both shrouded in sadness until we got home where my mother, with her great warmth, pulled us out of our dampness and sadness.

After my father died in 1970 –a large and awful story of cancer that I have not yet had the grit to write about – the 64 Rambler became my own car. I drove many times from Boston to Mahopac to spend time with my grieving mother. I drove it until the drive shaft came loose; it was likely the universal joint had broken.

I had replaced the clutch on that car so replacing a universal joint was not a big deal. But while it was parked outside a friend’s apartment in Somerville, kids broke into it and sliced up those red leather seats.

So I never went back to it and it was eventually towed away, hardly a fitting end to the only new car my father ever bought.