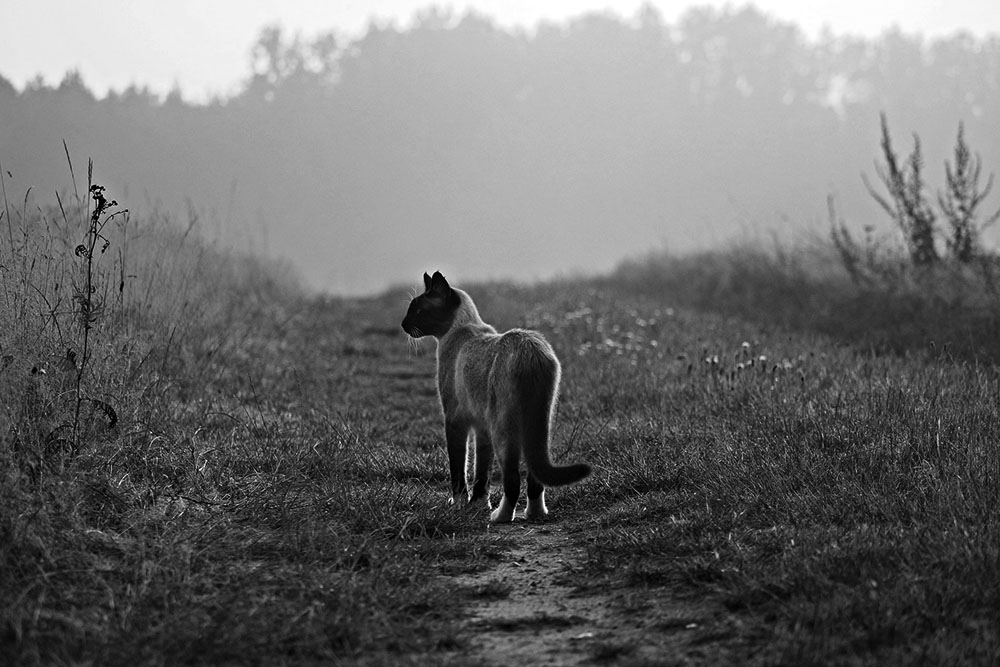 The End of the Cat

I am not exactly a cat person: I love dogs and cats equally. But this is a story about a particularly deep relationship I had with a cat, growing up, and how that cat fell victim to our primary family tragedy.

We always had cats and dogs, family members all of them. One of them – which had no name – was just called “The Old Mean Cat” and it had such a strong personality that it deserves its own story, but for another time.

The cat I am writing about was a Siamese named Kio. Kio had been a New York City apartment cat and its previous human came to the entirely correct conclusion that Kio was just not an apartment cat. So one day it arrived, with a nice knitted blanket that was said to be its favorite thing.

All of our cats were outdoor cats. The current awareness and concern that cats kills massive numbers of songbirds had not yet surfaced. And we never had a catbox and never knew where the cats went to relieve themselves. (Same for the dogs, by the way.)

Kio became two cats in one: the fiercest hunter of any cat I ever met; and also the most loving companion.

Kio didn’t kill many birds that I recall, but wreaked havoc on the local population of young woodchucks, rabbits, and snakes. Since we always had a huge garden that was a serious food source, we had no issue with Kio keeping the large rodents under control.

I don’t remember Kio ever catching a mouse, mole, or shrew. I think those little things were simply not worthy of her attention.

When we were rebuilding our farmhouse there were times the walls were open. My brother would wake up in the morning to the sound of Kio crunching up a baby rabbit under his bed.

She didn’t bring her catches to us as gifts: she ate them.

These days cats in rural areas are quite subject to becoming meals for larger predators, such as coyotes and fisher cats. But Kio never came across anything that she could not fend off. She always came home.

And when she set aside her huntress persona she was a different cat: she loved human contact and she never scratched or bit any of us. When the family would take walks in the woods, Kio would walk with us, parallel to our track, about 15 feet to the side. Bonnie the dog would walk right with us, as dogs tend to do, but Kio preferred a buffer zone. Perhaps she was posting herself out there in order to spot potential attackers and protect the family from them. I imagined that if a wolf had come after us Kio would have killed it on the spot, but of course there were no wolves or coyotes in our area back then.

I used to drape Kio around my neck and walk around with her hanging there, a living fur collar. I could walk to any part of the house, even outdoors, and Kio would just hang there.

Sometimes we would sit together on the warm driveway (oddly, we had a paved driveway off of the dirt road we lived on.) I would arrange Kio on her back and see if I could get her perfectly lined up, four legs up, tail straight out. She was so utterly mellow that I could arrange her just the way I wanted and she would act like a stuffed bean bag cat.

I went away to college but Kio was still happily living the rich life of a country cat with acres of fields and forests to roam and my parents to supply affection. Bonnie the dog had already passed away, another sad story.

And then my father fell into the nightmare of cancer.

We will skip over the horrendous details of the that nightmare in order to deal with how Kio fell victim to the situation. Some day, perhaps, I will be able to write about my father’s passing and the toll it took on the family, but for now let’s just see how it affected my Kio, the greatest cat I ever knew.

After my father passed it became entirely clear that my mother could no longer live alone on the farm so we had to find someone to rent it.

And it is not easy to find someone to rent a farm with a long steep driveway on a dirt road, with tricky issues about freezing pipes and rickety floor boards.

But we knew if it was left empty that kids would soon break in, vandalize it and probably burn it down, so we had to find someone.

When the realtor brought us a rock band who wanted to rent it, I knew this was a terrible idea. But I was the youngest of three sons and could not overturn the idea. And I had nothing else to offer.

All of us lived in various cities, so if we took Kio she would be locked in an apartment again. The rock band in our country home seemed like the best option for her.

So the band moved in. We made them promise to take good care of Kio and not to bring a dog in. They promised.

The rock band proceeded to live up to every sort of prejudice you might have had. When my mother went to check on things she found that they had gotten a goat, but it was locked in a tiny tool shed with no water, and in very bad shape. No one was there. My mother brought it water and tied it up outside the shed.

Eventually I went back to the farm with my mother to see what was going on. The place was deserted, just dirty dishes and ashtrays as evidence of recent semi-human habitation.

And there were signs that a dog had been there, a large dog, judging by the dog dish and plentiful dog shits on the lawn.

And so I started to look for Kio, with a sense of dread.

In the field below our back lawn there was huge rock, literally the size and shape of a whale, and that had been a place Kio would sometimes hang out to watch over things.

I climbed down from the lawn to this lower field and looked more closely at that big rock.

And there on the top of it, was the skeleton of my cat Kio.

She had been driven from the house by the dog that they promised not to bring.

She had sat on that rock until she died.

You can wonder how a cat that can kill and eat anything smaller than her could starve.

I can’t answer that, but I can’t help feeling that she died from a broken heart, deserted by her family, driven away by a dog, and with no hope, she just laid down and died.

I felt enormous sadness and guilt. I still feel it today.

Eventually we learned that the rock band had disintegrated when the leader died of a heroin overdose.

I can’t help it. I feel a vast well of emotion over Kio and almost nothing for the dead rock musician.

Somewhere in the house I found a demo record the band had recorded and I kept it. I still have it somewhere. Whenever I run across it I am reminded how Kio died, alone and scared, a victim of a band that died of heroin. And yet another victim of my father’s cancer.