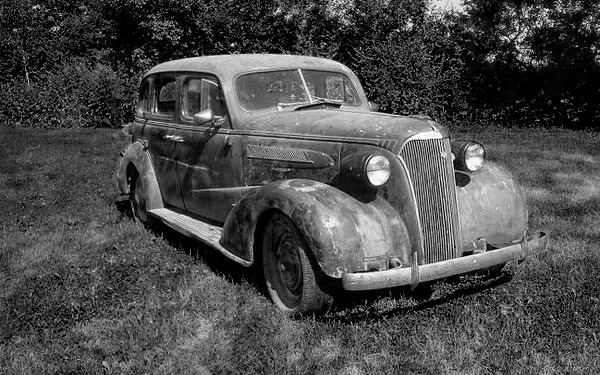 I remember it being a ’37 Chevy, but it might have been a different year or different make, but the photo is about how I remember it.

The year was about 1956 and this Chevy was one of our 2 family cars. It was, for sure, a manual transmission car, which is why my mother parked it in front of the house, still running, with the emergency brake on, while she went in the house with groceries.

Our driveway was long and steep. And we had a cow. And the cow would sometimes get out of its field. This day, the cow came over and must have rubbed against the car, looking for a scratching post.

There was a fine coating of thin, icy snow collecting on the ground. So when the cow nudged the car, it started sliding down the hill.  It slid along the driveway for fifty feet, but where the driveway turned a bit to the right, the car went more straight, onto the back lawn, down over the rocky edge of the lawn, down into the field, and finally came to a stop against a pair of small trees.

(It is possible that it wasn’t icy, and that the cow was not involved, and that the brake just let loose, but that’s now how I remember it…)

We came out of the house, noticed the car was gone, followed the skid marks all the way down to the car, which was still running with the radio playing.

“Guess you heard about Nash,
he was killed in a crash,
Oh that must have been
two or three years ago now,
Yeah he spun out and he rolled
he hit a telephone pole,
And he died with the radio on.”

And when we stood next to that ’37 Chevy sitting against the trees, engine idling, with the radio on, it left a strong impression that came back to life when I heard the Tom Waits song years later. Of course… when Nash died hitting the telephone pole… of course the radio was still on.

(And in Mahopac, in those days, hitting a phone pole was a common way to total your car and kill most of the passengers.)

My mother had a quite a story to tell my father when he got home from work.

My father and brother tried to tow the car out of the field with our John Deere, but could not get it all the way out, so it sat in what we called the Field Below the House for about 15 years.

During the decade and more that it sat in the field it was a great plaything for us. We could sit in it and pretend to driv, fly planes, or open the hood and bang on the engine parts.

Eventually it was so infested with wasps that it was only possible to go near it during the winter.

After my father died in 1970 my mother finally hired a guy to tow it away.

It is odd to think that in 1956 one of our family cars was a 1937 model. And of course, the idea of storing it safely until it became a valued antique … never crossed anyone’s mind.